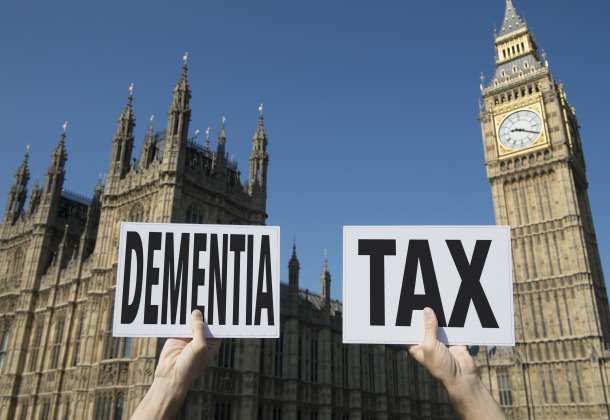 a new name for an old chestnut

What’s all this fuss about The Dementia Tax?

It’s odd that there has been so much vociferous debate about “the dementia tax”, as if this is an outrageous new concept proposed by a rapacious government. The truth is that people with dementia have been robbed of their legacy for decades to pay for their care.

It’s always been an outrage

This has always been a desperately unfair system. The elderly people affected have worked and saved hard all their lives to pay off their mortgages and accumulate savings.

Let’s not forget that the very same people have diligently paid their taxes for decades. The fundamental function of a welfare state is that the general population shares the burdens of age and illness through taxation.

These elderly people have upheld their side of the bargain for decades, only to be singled out for persecution at the end of their lives.

My client John looks after his wife, Linda, who has dementia, and he is naturally worried about might happen next. He recently summed up the feelings of many people in his position:

“If Linda’s illness was cancer rather than dementia, I wouldn’t be made to worry about meeting the cost of her care. Why should we be treated differently just because of Linda’s diagnosis?”

Having thus been singled out, people with dementia are robbed of their ability to pass on some security to the next generation. This at a time of housing crisis, when younger generations have never been more vulnerable or more reliant on the hope of an inheritance, either to redeem their own mortgages or even to get on the property ladder in the first place.

One out of every four elderly people will require residential care at the end of their lives. For every three families that can pass some capital from one generation to the next, one family will be denied that opportunity, simply because their elderly relative had the misfortune to be struck down with dementia.

What would change under a May government?

So, there’s nothing new about a Dementia Tax. It’s alive and kicking and hard at work stripping older people’s assets. Its current incarnation is The Care Act 2014, and the latest hotly-debated proposals are simply tinkering at the edges.

But when the Care Act 2014 was first introduced, a minimum threshold of £118,000 was promised. That promise is now being unapologetically broken in the Conservative election manifesto.

The same manifesto seems to guarantee that everyone affected will be able to retain at least £100,000 to pass on to the next generation. However, under the current regime, there’s an odd loophole whose effect is that, although the threshold for fully-self-funded care is £23,250, only £14,250 is protected to pass on to beneficiaries.

Which raises a significant question mark over how credible this £100,000 pledge is. Is this really the amount people will be allowed to reserve for their legacy? Or will there be a separate, considerably lower, “protected amount?”

There has outcry about a proposal to extend means testing to include at-home care as well as residential care. But elderly people have been paying regular monthly bills for years to meet the cost of at-home care, meals on wheels, lifeline devices and other support.

Undeniably, at-home care costs a fraction of the average £40,000 annual cost of residential care. But the idea that at-home care has been free of charge until now appears to be a misconception.

The Conservatives have renewed their promise to introduce a “Care Costs Cap”. This was a key plank of the Care Act 2014 when it was first introduced. The pledge was that no-one would ever have to pay more than a total of £72,000 for care across their lifetime. It was made very clear that this was purely in respect of care, and did not include the “board and lodging” element of living in a care home. But nevertheless, this provision was anticipated with relief by many families.

But then, immediately after the 2015 general election, this key element of the Care Act was “postponed til 2020” - although most commentators assumed it would be quietly dropped altogether.

When backed into a corner by the “dementia tax” outcry, Theresa May dragged the Care Costs Cap out of the cupboard, blew the dust off it and dangled it, carrot-like, before the electorate. She was, however, careful not to put a figure on the proposed cap, which indicates that the hoped-for £72,000 cap is unlikely to materialise.

So, where does this leave us?

Not much further forward, is the short answer. Which means it’s still down to us, as individuals and families, to take legitimate steps to plan for the cost of care in later life. With the right estate plan, you can do a lot to minimise the impact of the Dementia Tax and preserve more of your legacy for your family.

For help with mitigating your family’s exposure to the Dementia Tax, call us on 0151 601 5399 or complete the enquiry form below.