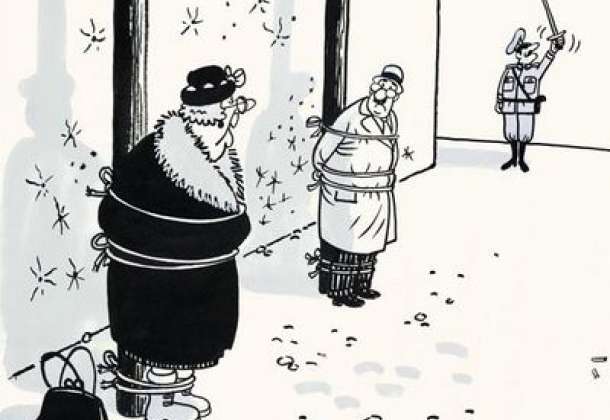 Standing Up for the “Mustn’t Grumble” Generation.

Recent reports suggest that older people are getting a raw deal in many aspects of life, because they generally don't like to complain. How can we make sure older people receive the great service they deserve?

It seems to be getting depressingly clear that, the older you get, the more vulnerable you are to being exploited, ripped off, given shoddy service, and even neglected to a dangerous extent.

From what’s been in the news lately, it seems that older people’s natural politeness and reluctance to make a fuss is almost routinely being taken as an invitation to give terrible service and charge inflated prices. And in the case of health and social care, complacency due to an absence of complaints sometimes leads to older people being placed at risk of harm.

A raw deal in health care

In her recent report, Dame Julie Mellor, the Health Ombudsman has warned that older people are the least likely to complain when they receive poor care. One in seven older people who received NHS care in the last year were treated badly in one way or another. And yet almost two thirds would not dream of complaining.

As an example, Dame Julie told one shocking story of an elderly woman who was left blind in one eye as a result of a botched cataract operation. Despite being left unable to drive as a result of the blunder, and so having lost much of her independence, the lady in question did not want to complain.

Patrick Collinson in the Guardian has been inundated recently with examples of the shoddy way banks and insurance companies treat their older customers. Collinson shared one particularly striking example of an older lady who had been a longstanding loyal customer of Halifax Building Society.

In addition to her mortgage, this lady had been a loyal user of Halifax home insurance, renewing her policy annually despite the fact that the premiums were dramatically inflated year after year.  Eventually, the premiums were more than double their original amount despite no claim ever having been made. But the lady did not complain and lacked the confidence to shop around online for a better deal. When she could no longer afford the inflated premiums, Halifax went a step further – they reopened her long-paid-off mortgage account and simply debited the premiums to that account – adding interest every year. By the time she passed away, Halifax had built up a debt in her name to the tune of several thousand pounds.

Closer to home, let me share the story of my clients Bill and Vicky (not their real names – confidentiality is essential). Bill and Vicky are a retired couple who both have health issues – Bill has Parkinson’s and Vicky has problems with her memory – which can make them a soft target for unscrupulous cold callers.

They were bombarded with cold calls from representatives of a bogus “art investment” company, who persuaded them to “invest” £15,000 in works of “modern art”. When, on reflection, Bill and Vicky thought better of their decision and asked to pull out, their repeated requests were either ignored or met with further calls trying to pressure them to “invest” even more.

Many organisations seem to be tempted to take advantage of older people’s reluctance to stand up for themselves. But why is there such a reluctance? Dame Julie Mellor’s findings identify a number of reasons:

What can you do to help – and to protect yourself when the time comes?

Do you worry about your parents or older relatives being taken advantage of in this way? Thankfully there is a lot you can do, and one of the most effective strategies is to create a Lasting Power of Attorney.

If you want to support and protect a parent or an older relative in their dealings with financial institutions and companies, your relative can create and register a Lasting Power of Attorney for Property and Financial Affairs, appointing you as their attorney.

This is what Bill and Vicky did. They had already registered Powers of Attorney, officially appointing their sons as attorneys. This meant they could call upon their sons’ help when the problem with the “art company” got out of control. The Lasting Power of Attorney gave their sons official power to intervene, and vigorous steps are now being taken to retrieve the £15,000. Their sons have also been able to get all future nuisance calls blocked and will be able to help manage routine dealings with banks and financial institutions. So, Bill and Vicky have peace of mind, knowing they will always receive the service and value for money they deserve, thanks to their sons’ support.

If you are concerned about the quality of care your relative is receiving from the NHS or social services, and you want to be able to speak up for them, a Lasting Power of Attorney for Health and Welfare is the key to getting your voice heard, because it bypasses the “patient confidentiality” excuses that sometimes get in the way.

And finally, it pays to plan ahead and have protection in place for your own future. Lasting Powers of Attorney are mainly a forward planning tool which, ideally, are best created in mid-life to provide a safety for later life. Think about appointing your adult children, your spouse or partner or friends, colleagues or professionals you trust as your attorneys. That way, if problems do arise in later life, you have ready and able to stand up for you when it counts.

Our job is to empower you to stop this kind of thing happening to you or those closest to you. So, to find out more about protecting yourself or the people you care about, feel free to get in touch, either by completing the contact form below or by calling us on 051 601 5399.